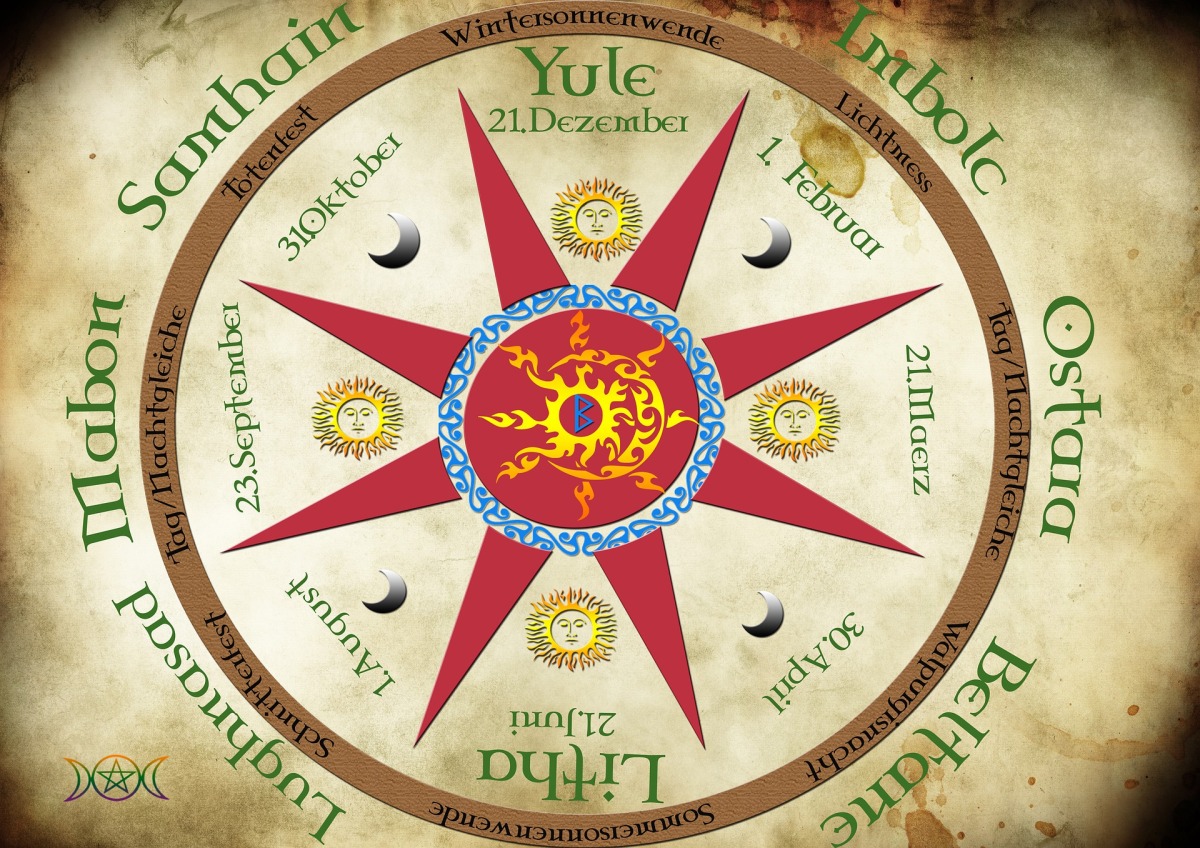 If you’re new to the craft you may have started spotting new celebrations you have never heard of starting to appear on your News Feeds, especially on TikTok. Don’t be fooled by thinking the Wheel of the Year is something only used by Wiccans but also, if you don’t want to follow the Wheel of the Year, you don’t have to either. Everyone’s practice is personal.

As you’re here at Digital Coven to learn and discover, it would have been remiss of us to not at least introduce you to the sabbats. As a caveat before we get into the nitty and gritty, the dates I’ll be using are for the Northern Hemisphere as that is where I am and is what I know and I wouldn’t want to get anything wrong.

The Wheel of the Year, is a medley of fire festivals, chief solar events, equinoxes and solstices. Almost a calendar for the working pagan / witch / Spiritual Person™ . The Sabbats and a lot of Magic is seasonal and an easy way to connect to your path as a beginner, especially if you’re still not open about your craft yet.

This post in particular is more of a ‘starting point’ or a snapshot to the sabbats and the Wheel of the Year, throughout the year we will include more detailed posts for you so you can learn as much as you can in one place.

Everyone knows this one. Associated with Christmas, the Wild Hunt, the deep midwinter. It’s actually a 12 day long celebration too so no need to worry if you miss the first day.

Here are a couple of starters for ten in terms of rituals and celebrations:

Meaning ‘in the belly’, imbolc is a celtic festival originating in Ireland and represents the stirring of new life. This is where the earliest signs of rebirth appear, sometimes in the form of new leaves and buds. The world is getting ready to wake up again.

Imbolc is also associated with the Goddess Brigit / Brigid/ /Brighid Bríg. Some may already know her as St Brigit. Brigid is a fire goddess and often associated with protection, healing, smithcraft, and poetry.

In the Christian calendar, this date is also marked by Candelmas so some of the traditions may be the same or similar.

Things you can do to celebrate imbolc:

Beltane is the first Fire Festival of the year and where celebrations really start to begin. Beltane originates in Ireland from the celtic god Bel. Traditionally, bonfires would be lit to honour Bel and also to celebrate the return of the sun and spring with longer days coming ahead. You may also be thinking May Day and May pole and you’d be correct!

Beltane is around the time of year where everything has really sprung to life and as such is also associated with fertility and the idea of ‘everlasting’.

The bonfires lit for Beltane were often public bonfires that people would ‘jump’ for protection and fertility and before they were extinguished, the people would take some of the fire with them to light their hearths.

Things you can do for Beltane:

Probably the most famous solstice, the one you see on the telly every year where people flock to Stonehenge to take in the vibes. This is Midsummer (like Yule is midwinter) and also the longest day of the year. Many will make a pilgrimage to Stonehenge or other spiritual sites, but if this is not possible for you, there is plenty you can do at home too.

Lammas literally translates as ‘loaf mass’  and is the time we celebrate the first grain harvest (basically, the first of many harvest festivals). Lammas is also known as Lughnassadgh and Lugnasad.

As with many dates on the wheel of the year, particularly those that follow Lammas. This is a time where we give thanks for the harvest and feast as well as honouring Lammas, our harvest queen.

Things you can do for Lammas:

Another transitory time where the days start getting colder and shorter. The leaves are starting to turn red and orange, occasionally there will be a little bite in the air… Autumn in my favourite.

The Autumn Equinox is also known to some as Mabon, you’ll see this more often in American Wicca or witchcraft practices. This is the time of Mid-Harvest, particularly for fruit. As the seasons change we would traditionally start preserving food for the winter and long night ahead.

Things you can do for the Autumn Equinox:

Also known as AJ’s Christmas… Samhain is the point where the nights are at their darkest, the veil is thin and spirits can wonder again, not only that… it’s the Witches’ New Year.

Any Scorpios here, this is where you are at your most intuitive. Some of us feel the energies of the spirits as they come and go, we can celebrate the cycle of life and death as the Witches’ year and the nature around us has ‘passed’.

Samhain has its roots in Celtic practices, particularly in Ireland. We have the legend of Stingy Jack and how he lead to the creation of the Jack-O-Lantern, bonfires would be lit and costumes would be worn to ward off unwanted spirits.

Anyway, surely you know a lot about Samhain / Hallowe’en so let’s get down to what you can do…

So, there we go. A little snapshot into the Sabbats, be sure to add them to your diaries and celebrate the old ways with us.

If you want to follow Aj check out her fabulous social accounts:

Witchcraft Around The World: The fabulous Tanja, shares her insight into Walpurgis Night. 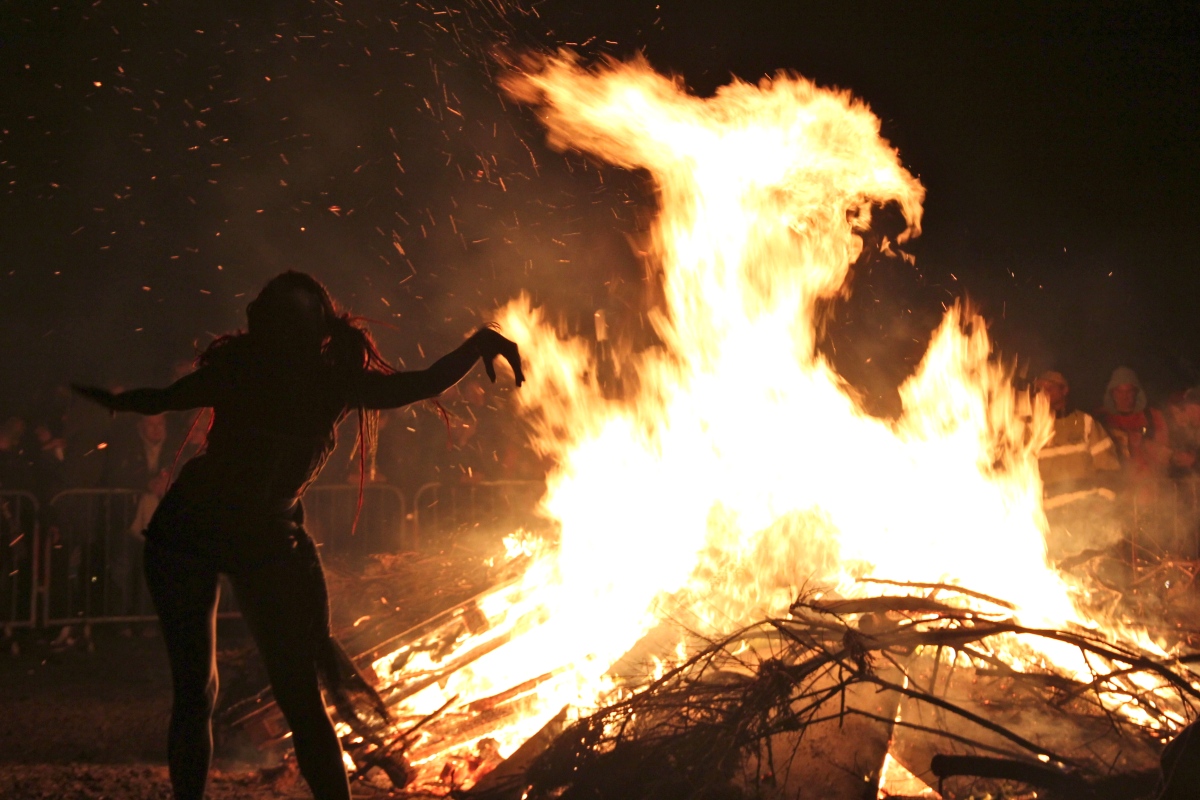 We love learning about all different type of Witchcraft here at Digital Coven and today we have the fabulous Tanja, sharing her insight into Walpurgis Night.

Take it away, Tanja!

Greetings fellow witches! You may or may not be prepping to celebrate Beltane this weekend, so I thought I would make you familiar with what I like to call its “German goth counterpart”, – Walpurgisnacht, or the Night of the Witches, which takes place on the night of the 30th of April.

As you may know, Beltane is the pagan festival held halfway between the spring and summer equinox, celebrating the blossoming of trees and flowers and the days getting warmer. It takes place between 30th of April and 1st of May and therefore traditionally includes May Day celebrations which span across many different cultures – Celtic, German, Hawaiian and Greek, to name a few. They include dancing around a May Pole, making flower crowns and crowning a May queen (not to be confused with the customs of Midsommar – neither the Swedish festival nor Ari Aster’s horror masterpiece).

Beltane, from the Gaelic Bealtaine, can be roughly translated to “bright fire”. On the eve of May 1st, Pagans would gather to light bonfires and dance around them – since fire typically stands for purification and new beginnings, this ties in with Beltane’s themes of renewal and summer returning.

Like on Halloween (Samheim) and Midsummer, the veil between the realms of the living, dead and spirits is supposed to be especially thin this time of year. It is therefore no wonder the night became associated with witchcraft, its literal Dutch translation being “Heksennacht”, the night of the witches, which in German folklore became associated with a night where evil witches gather to plan their mischievous schemes.

The History of Walpurgis Night

For this negative association, we can thank the Catholic Church – as pagan beliefs did not fit in with the Christian religious ideals, during the Middle Ages they attempted to stamp out any other religion’s customs, including those of Beltane, throughout Europe. Walpurgisnacht i.e. “Walpurgis Night” derives its name from the Catholic missionary turned Saint Walpurga, who was celebrated for succeeding at putting an end to “pagan sorcery”.

Ironically, the image I associated with Walpurga until researching this date stems from a popular German children’s cartoon about a teenage witch – In this, she is the leader of the coven and looks like this:

As someone who grew up Catholic, that doesn’t look very pious to me, which goes to show that Walpurga today is associated way more with witches than she would have liked. Sorry, gal!

To give her credit, Walpurga actually did see to it that the pagan rituals didn’t completely die out: She was canonised on the 1st of May, and therefore, likely by accident, Christian and Pagan customs became entwined. Pagans could continue their celebrations without fear of being condemned, by doing it under the guise of honouring Saint Walpurga (article).

So, these practices could be continued quite freely in Medieval Germany, until the 16th century, which saw a massive hysteria about witchcraft followed by one of the most gruesome and bloody witch hunts in history taking place in Germany.

According to some legends, witches would gather in the valley and then ride up to the mountain’s peak – not just on broomsticks, but even on cats or goats!

In an attempt to protect themselves from evil spirits and witches, locals would gather on April 30th to light bonfires, burn straw men and make loud noises to chase away evil. The joyous pagan rituals for fertility and summer returning therefore morphed into a gathering driven by fear. Well done, Catholic Church!

Luckily, those superstitions began to gradually die out and Walpurgis Night celebrations carried on but became more light-hearted, as people would gather around the fire, celebrate, and sing folk songs. The festival might not still be part of the German Zeitgeist today had it not been for Goethe’s famous poem Faust, published in the 19th century, which sees the protagonist travelling to Mount Brocken and taking part in the witches’ celebrations.

This poem, loathed by German highschoolers throughout the country, re-popularised Walpurgisnacht and is likely to thank for why it is still popular today.

Today, Walpurgisnacht remains part of German popular culture, with many other stories about the Witches’ mountain gatherings having sprung up in the century following Goethe’s Faust.

As for the celebrations, most that remains of them is the lighting of and gathering around bonfires, although this is now being celebrated under the new motto of Tanz in den Mai – “Dance into May”. Turns out, pagans, legendary witches and normal human beings alike love a bit of revelry and dancing around a fire! Due to the first of May being a bank holiday, Labour Day, people still traditionally like to go dancing at clubs which do “Tanz in den Mai” themed nights. I have taken part in many of these club nights and regardless of alcohol levels, the night has always felt special to me. Maybe there is something to the veil between the worlds being more permeable. Or maybe I just feel very seen as a witch on this holiday which is, in a way, dedicated to us.

You can stay in touch with Tanja and find her shitposting and creating other digital content about drag, queer and witchy stuff on Instagram @tanjaktx and Tiktok @tanjatix

If you wish to write an article for Digital Coven please get in touch on our contact page or just pop an email over to us on digitalcovenuk@gmail.com or you can always reach out via our social channels: